Below is a list of diverse resources and ideas that don't fit in anywhere (yet). We will include these in the formal structure of the book as it develops.

1. Two theoretical traditions that could possibly be considered here:

2. Work on knowledge management could obviously also be useful, especially ideas around the different forms of knowledge transfer: tacit-to-tacit, tacit-to-explicit, explicit-to-tacit and explicit to explicit. John Seely Brown and Paul Duguid's book "The social life of information" may be a key text.

3. Paavola et al. decribe three kinds of Computer-supported Collaborative Learning (CSCL) environments, based on three different epistemologies - "the model of knowledge creation by Ikujiro Nonaka & Hirotaka Takeuchi, the model of expansive learning by Yrjö Engeström, and the model of knowledge building by Carl Bereiter". Haven't read properly, but could be worth checking out.

4. Fischer describes a seeding, evolutionary growth, and reseeding model of collaborative work. A seed is an initial, incomplete collection of domain knowledge which then gradually expands during an evolutionary growth phase until it becomes too disorganised and needs to enter the reseeding phase - a "centralized effort to organize, formalize, and generalize information and artifacts created during the evolutionary growth phase". He uses For open source software systems as an example, as they "often evolve for some time by adding patches, but eventually a new major version must be created that incorporates the patches in a coherent fashion". What is nice about Fischer's model is that it works against the temptation to try and build "complex information systems as 'complete' artifacts", and encourages a process view of collaboration. The article also has a very nice table listing differences between thinking of learners as consumers versus thinking of them as co-designers.

5. Allen et al. have some interesting theoretical ideas on the relationship between collaborative learning and social capital.

6. Work on group processes (e.g. ideas about how groups go through phases of storming-norming-performing and psychoanalytic ideas around projection etc) is obviously relevant to how groups learn (and how individuals learn in groups). 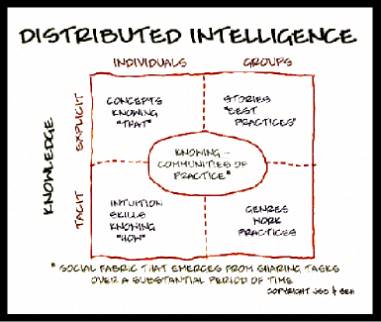